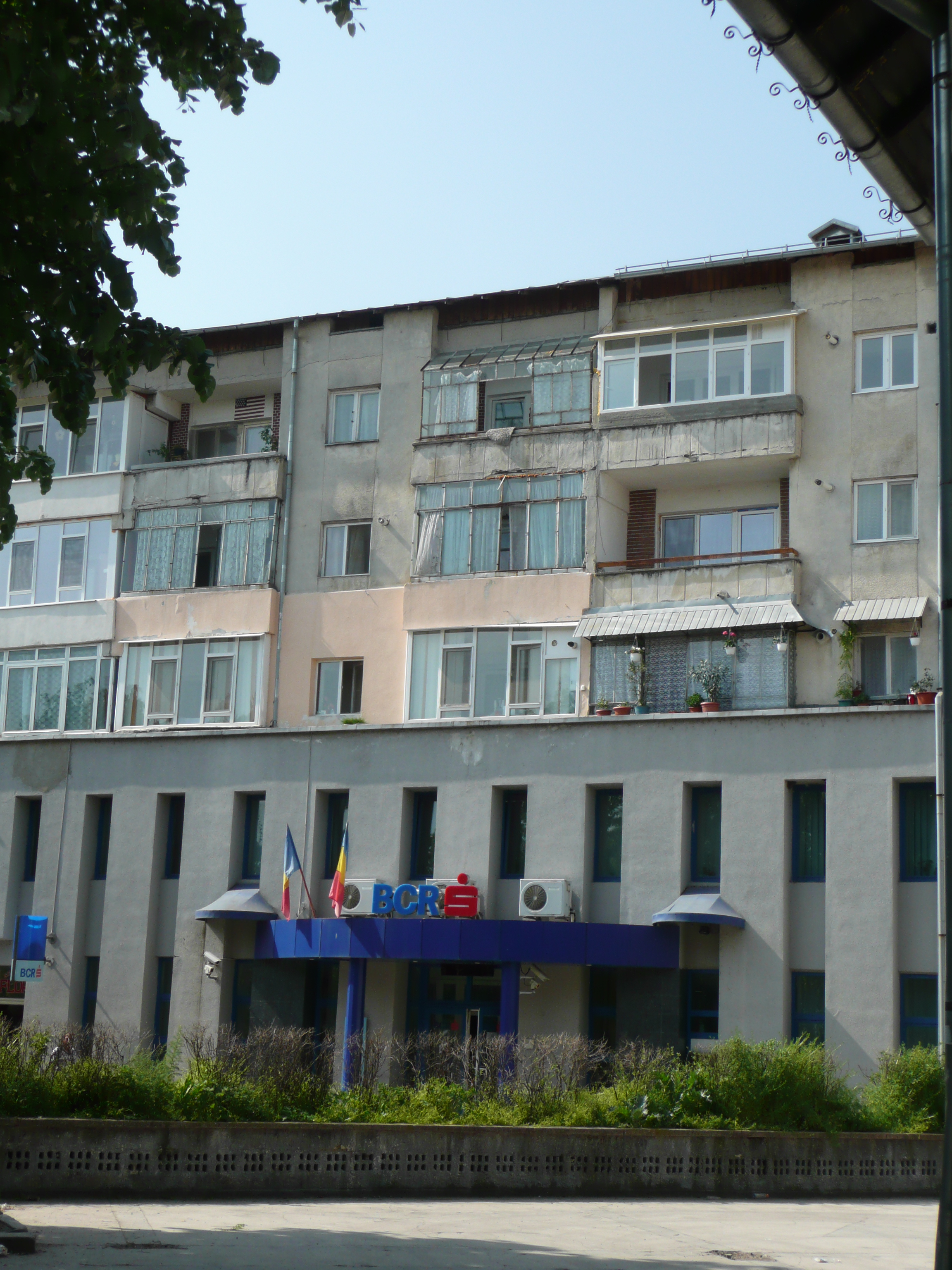 Branch office of the Austrian S-Bausparkasse (Erste Bank) in Romania

Since the collapse of communism, foreign banks bought up roughly 80 per cent of all the banking business in the new Central European member countries of the European Union. The most successful banks were those that bought early. The markets were still relatively small, but growth rates were high, and so were profit margins. To many foreign financial experts it was a surprise who got in first. Germany was the region’s biggest trading partner, but German banks were busy at home with the shocks and costs of the unification of Germany. Somehow they left Eastern Europe to their small neighbour, Austria. Raiffeisen, a co-operative banking group, which had already expanded into Hungary before the coming down of the Iron Curtain in 1987, was in seven more countries by 1998. Even a little earlier, the banks making up Creditanstalt and Bank Austria, which merged in 1997 (BA-CA), first entered the market. BA-CA was bought by HVB of Germany in 2000, which was in turn bought by UniCredit of Italy in 2005. In both acquisitions the BA-CA’s business divisions in Central and Eastern Europe were the big prey the predators were after. The third Austrian bank to join in the rush was Erste Bank with its purchase of Ceska Sporitelna, a Czech bank, in 2000.

As the Balkan wars subsided, more countries became bankable. Raiffeisen bought into Bosnia in 2000, Serbia in 2001 and Albania in 2004. But by then other foreign banks were in the race, chasing a dwindling number of prospects and prices spiralled upwards. In 2005 Raiffeisen paid more than four times the book value for a bank in the Ukraine, Bank Aval; and Erste Bank paid 5.8 times the book value for a Romanian savings bank, Banca Comerciala Romania, beating off five other bidders. Asset growth in these markets was expected by some to be 40 – 50 per cent and that explains why these high prices were paid. But others were of the opinion that a price five times the book value was too high and it was uncertain whether the extremely high expectations about key criteria like economic growth, customer growth and profit growth would be realised. They were proven right in the end.

Yet the best-performing ex-communist economies were setting quite a pace: Estonia and Latvia posted 10 per cent growth in 2005, reminiscent of the “Asian tigers”. The question was then whether the “new” Europeans could keep growing at such rates for some time and catch up with the richer western part of the continent. There were surprisingly few worries about external shocks, though for instance Hungary had big current account and budget deficits. But for most countries the basic competitiveness was paramount. A study by the Vienna Institute for Comparative Economic Studies and Bank Austria Creditanstalt in 2006 painted an encouraging picture, at least for the eight ex-communist countries that joined the European Union in 2004. They were commonly termed the EU-8, but sometimes also “lynx economies”, named after the region’s fierce felines and in reminiscence of the “Asian tigers”. Their prospects were much brighter than those of the EU candidates of 2007, Romania and Bulgaria. In particular, the EU-8 were expected to be able to keep their edge against their Asian competitors in the EU market. The study measured the EU-8’s competitiveness in terms of export performance, both size and quality, economic structures – a big share of services was a strength, farming and manufacturing were not – and the friendliness of the business environment, from bureaucracy to infrastructure. In some areas they had almost caught up with Western Europe. They gained, for instance, 65 per cent of their gross value-added product from services, only just below the rich EU countries at 69 per cent. The second-rank “Asian tigers” like Indonesia, Malaysia, the Philippines and Thailand, made only 47 per cent through services. The growth in the EU-8’s exports to rich countries beat that of any Asian country except China. Those exports were fuelled by sharply rising foreign direct investment. As a share of EU-8 GDP, it was worth 29 per cent in 2000 and 38.1 per cent in 2004. Even better, the quality of exports was shifting upwards then. The study noted particularly fast growth in what were called “medium high-tech” industries, which made up the biggest category of exports.

Yet two big weaknesses remained. One was in the quality of public institutions, even if that was improving slowly. The second and bigger problem was in research and development. Most ex-communist countries devoted minute amounts of money to these fields, on average 0.8 per cent of GDP, compared with 2 per cent in Western Europe. The complaint was raised in the EU-8 countries that the foreigners who owned most of the enterprises preferred to shop at home for brainpower that the rich countries subsidised more generously. But the true problem was that post-communist universities were still largely unreformed then, complacent and introverted. There were several ways in which they could boost the efficiency of their university systems like paying internationally competitive salaries so that the researchers did not emigrate or to teach partly in English to attract foreigners and to encourage closer links with businesses.

Bulgaria and Romania were also developing in a positive way in some areas. The changes were an example of how the EU could wield “soft power”, using the attraction of EU membership to get countries to change. In Romania GDP was growing at more than 5 per cent per year in the early 2000s. The real-estate market, supported by the growth in the banking sector, was booming, especially around Bucharest. Foreign investment had overtaken that of Hungary and Bulgaria. According to a study by Bank Austria Creditanstalt, Romania attracted €15.4 billion in foreign direct investment from 2000 through 2006, compared with Hungary €13.6 and Bulgaria €9.6 billion. Much of the investment in Romania was in small and medium-sized businesses, especially from Italian firms. Certainly, many areas still seemed incredibly backward, poor, rural, and stuck in ancient ways; there were still high illiteracy rates. However, Romania’s development was following the pattern of other Eastern European economies. The Vienna Institute for International Economic Studies found that in the beginning, investors bought tangible assets like former state-run companies or land or they built their own factories. From then on a drop in the agriculture’s share in the GDP became noticeable. Then a real-estate boom was supported by an expansion in the banking sector. Lending to private consumers and businesses rose by nearly 40 per cent in Romania in 2005, for instance. After selling off most of the state-owned banks, the Romanian government owned less than 10 per cent of the banking-sector assets. Investment in land and manufacturing, coupled with EU accession would lead to more investment, analysts predicted. The Bucharest exchange, founded in 1882 but discontinued during the communist era, was still less than half the size of Hungary’s and one-fifth that of Poland’s. Experts noted that EU entry would double or triple the exchange’s market capitalisation. EU rules requiring listed companies to have more liquidity would give the exchange a further boost. The key to prosperity in Bulgaria and Romania would be implementing Western standards of transparency and getting rid of corruption.

In general corruption in ex-communist countries seemed to be declining. For these countries, stabilising economies and introducing market mechanisms proved to be the easier bit. Remaking public institutions, and making them clean and efficient, was much harder to do and to measure. A study published in July 2006 by the World Bank still cast an optimistic light. Compared with previous surveys in 1999 and 2002, it suggested that corruption in the region was becoming a little less frequent, costly and damaging.

Another area where Austrian banks wanted to play a significant role was Turkey, EU candidate since 2005. The Turkish banking market was one of South-Eastern Europe’s most attractive and one where the Austrian banks already had connections during the time of the Austro-Hungarian Empire. In 2005 the GDP grew by 7 per cent and most of Turkey’s 70 million people were under 40 years of age. Retail banking was still less developed than in the west and there was great potential for banks to make profit from mortgages, credit cards and other banking services. As big European banks had little room to grow at home, they were chasing opportunities in South-Eastern Europe. Almost all of them looked at Turkey. French and American banks bought shares in Turkish banks and most astonishingly, a Greek bank, the National Bank of Greece, bought the Turkish Finansbank in 2006. Despite a remarkable growth in the two countries’ bilateral trade, a financial investment of this size seemed a breakthrough in a troubled political relationship. That might have been a touch of historical relationships of the more distant past: Greek bankers were the main financiers of the Ottoman sultans.

The financial crisis of 2008 and the following economic depression, Euro-crisis and banking crisis put a dramatic end to the high-flown expectations of Austrian banks in Central, Eastern and South-eastern Europe with dramatic bank bail outs, the establishment of bad banks like the Austrian Hypo Alpe Adria and its bad bank Heta, and political backlashes of right-wing populist governments such as the one of Mr. Orban in Hungary.

Literature: The Economist, A Survey of International Banking, issue 20 May 2006